Me and my gal are two adventurous spirits who are always looking for new places to explore. Last month we celebrated our 4th year anniversary as a couple and we wanted to do something different. Our last 3 anniversaries all involved eating dinner, watching movies, exchanging gifts, and sleeping. For our year 4, we decided to take a trip to San Clemente so we could enjoy a bit of sun, sand and sea. Living in Minnesota, we often deal with brutally cold winters so a trip to Sunny California was just what we needed to not only do something different for our anniversary, but also to escape from our busy schedules.

So, with all the other tourist spots available in California, you’re probably wondering why we chose San Clemente.Well to tell you the truth, we both wanted to go somewhere that wasn’t too “mainstream.” We wanted a place where we could relax, enjoy our anniversary, and have fun without having to compete with a crowd of tourists, and San Clemente just happened to be the right destination for us.

And that’s not to say that San Clemente isn’t a beautiful location because in my opinion, it is one of the loveliest hidden gems in California. When we made our reservations for a hotel, we made sure to get one that was within walking distance of the beach. We don’t have beaches in Minnesota and any chance we get to walk along the shore in romantic corniness is like heaven for us. 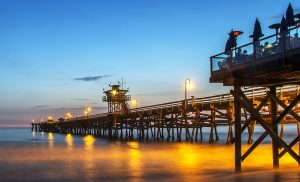 We both had 5 days of leave each meaning we had plenty of time to really explore this place. Our first stop was at Del Mar Street because my girl wanted to do some shopping, and me being the faithful and ever-loving man in her life obliged to her request. As we were strolling through Del Mar, my mouth went slightly agape because there were so many boutiques and shops to choose from. This was heaven for my girlfriend, but hell for my wallet (I bought her a gift here!), but it didn’t matter because it was our anniversary and I wanted to make her feel special.

I purchased a pair of espadrilles from Chanel for her and she was smiling and giggling like a toddler in the middle of Toys-R-Us. She asked me what I wanted for our anniversary and I told her that I was happy as long as she was happy, and that was more than enough (corny line, I know). But she insisted that I ask her for a gift, and so me being the obedient beau obliged to her request and asked her to buy me a Batman shirt.

After shopping, we ate at lunch at this place called “Nick’s San Clemente”, and man was the food there good. After eating lunch, we strolled around Del Mar for a little bit longer while checking out the other shops and doing some window shopping. It was already close to sunset when we headed out to the San Clemente Pier which is only a short distance from Del Mar Street.

The relaxing walk we took at the pier is a memory that will stay with me for a lifetime. It felt really good being able to watch the beautiful view of the sunset from the pier. The glistening waters of the Pacific Ocean made it feel like were on the cover of one of those romance novels with Fabio in them. To all my readers out there – do yourself a favor and visit this pier during sunset when you get the chance. I promiseyou won’t regret it.

We also rented a couple of bikes and rode along the coastal trail the following day. It was a great way for us to get some exercise and enjoy the view of the beach at the same time. And since we were close to the state beach, we decided to do some swimming and had a little picnic after. It felt great being able to swim in the ocean again because the cold temperatures back home often robbed us of that delight.

And of course, no trip to San Clemente would ever be complete without doing a little bit of surfing. My girlfriend is a bit of a risktaker which is the exact opposite of me. She was the one who suggested that we try looking for active adventure camp San Clemente reservations, and lo and behold we found a couple of surfing camps that caught our interest.

As Minneapolis natives it felt weird for us to try and learn surfing even though we live in a state that doesn’t have a single beach in it. But nevertheless, it was a fun experience and our instructor was professional, friendly, and very knowledgeable. We both got wiped out several times during the training session, but boy did we have a lot of fun doing it.

When we left to head back home, we both felt a bit of sadness because we had fallen in love with the place. San Clemente might not have the glitz and glamor of L.A., but it displays its beauty in its own unique way. Come to think about it, we might end up going back there again and maybe even live there when we retire (a guy can dream).